My two-month motorbike road journey in Vietnam inspired me to edit and republish my short video, route map and illustrated diary. Hopefully,  those photos, thoughts, and videos from this vacation will provide you with some much-needed rest after a long day at work. This motorbike trip will serve as inspiration for a future trip to the beautiful land of Vietnam.

Despite the fact that I’ve been fortunate enough to take numerous road trips across Vietnam over the years, the experience I find this trip most unforgettable that deeply imprints in my mind. Keep reading, and I bet that the following motorbike chronicles: Film, Map, Diary will enlighten you!

In the hope of finding the most scenic routes to ride in Vietnam, in September and October of 2015, I rode my motorcycle across Vietnam for two months, exploring much of the country and chronicling my adventure with writings, images, and video.

Starting in Saigon, I traveled across the nation on my beloved motorcycle, Stavros, with the goal of seeing as much as possible while gathering information for future postings.

Much of what caught my eyes during my two-month, 9,000-kilometer road journey in 2014 was documented on film. I compiled the videos from my vacation and put them together into a little film after I got back to Saigon.

The clips are organized in the order in which I traveled during my 60 days on the road, both chronologically and geographically. Since my first solo journey abroad in my childhood, the soundtrack, Led Zeppelin’s “The Song Remains the Same,” has served as an endless source of inspiration for me when traveling alone throughout the world, and the motorbike trip in Vietnam is no exception! 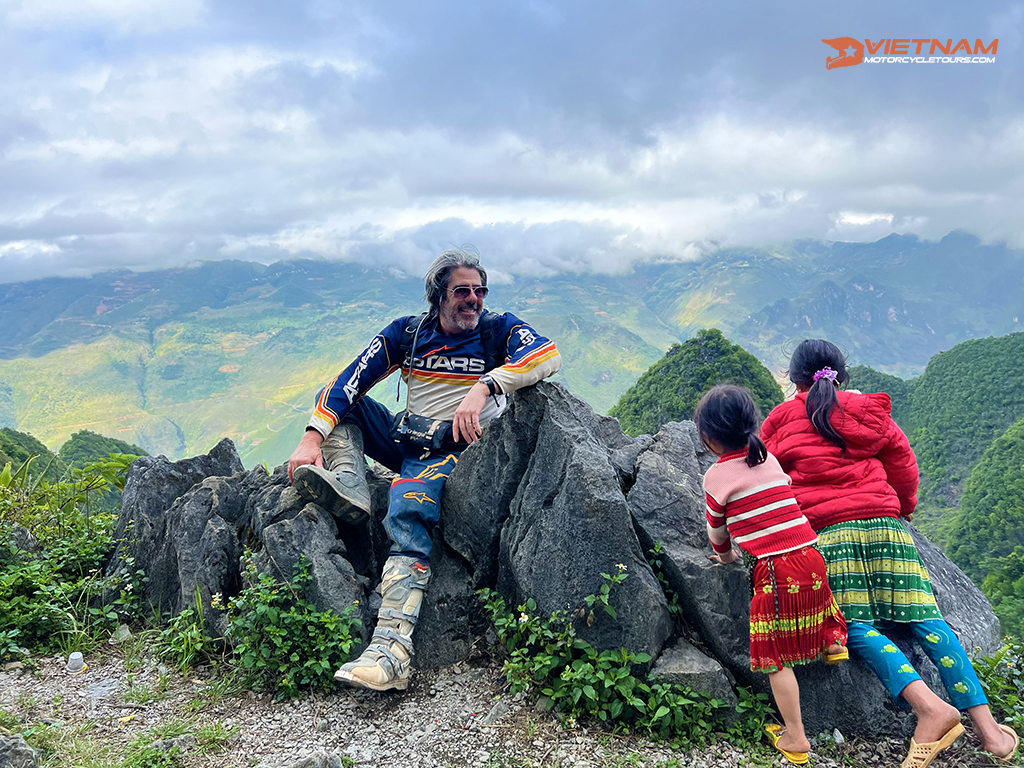 I mapped my precise itinerary, including all of my overnight stays, on my two-month road trip in 2014. The itinerary consists of about 9,000 kilometers on paved highways, mostly from Saigon to Hanoi and the Northern Mountains and vice versa.

The North of Vietnam, blessed by “mother nature,” holds a particular place in the hearts of many travelers. This location is breathtakingly lovely, with stunning features, including large lengths of rice fields. The rolling mountains are intermingled with valleys, and ethnic minorities with their own unique cultures provide a colorful picture of existence.

I especially love the citadel of the Ho Dynasty. Built with 1.5 m long stone slabs, with slabs up to 6 m stacked without adhesive, over the past 600 years, the wall system surrounding the Ho Dynasty citadel is still intact.

The North West Of Vietnam

The twisting and winding passages up to the Northwest highlands overwhelmed me. The inhabitants of the Northwest are kind, honest, and sincere, which adds to the region’s allure.

When I arrived at Thung Khe Pass, I was blown away by the breathtaking natural beauty. The pass road is gentle and twisting, with fresh green grass. The deep fog that surrounds Thung Khe Pass adds to the pass’s majesty, making me feel as if I were lost in a fantasy.

The Southern of Vietnam

Attractive backpacking destinations in the South invite visitors to discover and conquer. Many visitors are impressed by the South’s tenderness, tranquility, and simplicity. Huge fields of storks flying straight, soothing green rivers, and lovely orchards full of fruit are also featured.

In Kien Giang province, I had the opportunity to visit U Minh Thuong National Park, which is a protected area of the World Biosphere Reserve. U Minh Thuong arose in the west of the Ca Mau peninsula, along with the mangrove range that runs along the Gulf of Thailand.

This is a unique form of alum flooded forest in Vietnam that has been regarded as one of the world’s most one-of-a-kind and uncommon forest types.

The south-central coast of Vietnam has a lot of tourism potential, and its tourist appeal is evident. There is a variety of intriguing places and beautiful and unspoiled nature sceneries. You will be able to freely explore and learn about the culture and the local people here.

Furthermore, this city has won my heart with numerous spots that have their own unique beauty that can be found nowhere else. Beautiful landscape paintings have been bestowed onto our region by the Creator, making me melancholy and do not want to leave.

Hoan Kiem Lake is my favorite tourist site in Hanoi. It is regarded as the capital’s heart or a tranquil spot in the bustling metropolis of Hanoi.

During my two-month road trip in Vietnam in 2015, I kept a journal at the end of each day and decorated it with images I had shot that day.

I hope that my Motorbike Chronicles: Film, Map, Diary provides you with all the essential information you look for! Make sure to note down all the important things I have mentioned in this post for the greatest experience! If you are looking for Vietnam motorbike adventure, check us out! https://vietnammotorcycletours.com/

What riders have said about Vietnam Motorcycle Tours on Tripadvisor!