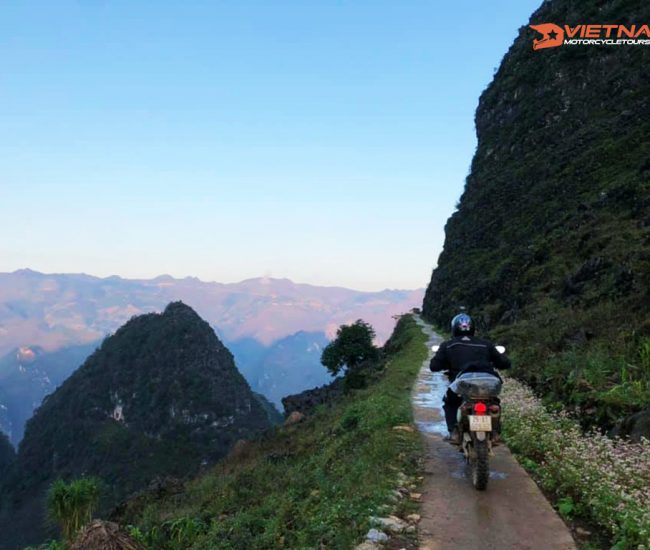 No one would dare to claim they have fully experienced the majesty of North Vietnam without visiting Ha Giang. This province is home to several magnificent mountains and situated about 1200 meters above sea level in northeast Vietnam.
So off we went, all the way from Hanoi. Ha Giang motorbike tours that last 7 days would allow the most adventurous hearts enough time to explore and appreciate the hidden paradise.

We headed to Thac Ba Lake from Hanoi - one of the largest artificial lakes in the country stretching over 23400 ha and home to more than 1300 islands plus islets, forming gorgeous caves. The majestic landscapes were like cool breezes to our souls, light and tranquil treats.

That was quite a good start indeed!

Already impressed by the greenery, we were eager to explore Bac Ha - a no less stunning landscape. As we hopped on our dirt bikes and tore along the winding roads, then crossed one road to another, we saw the gorgeous lush terraced fields and the local ethnic market unfolding and waving to us.

My travel buddy and I  felt completely at ease and in touch with the magnificent nature and lively local scenes. As we got back to nature, it was like we were home.

We went to Bac Ha Sunday Market, which still preserves the ethnic minorities’s traditional values. Locals here and from other provinces gather in the market to trade numerous goods, like textile, food, animals, and farming equipment, every Sunday only.

The vivid cultures and hospitable people there completely won our hearts. We bought some interesting silver jewelry and hired some traditional costumes to take photos. We couldn’t stress enough that Vietnamese people are super hospitable and heart-warming!

Suggested by our local guide, we got ready to set foot on one of the most well-known and breathtaking sites in our North Vietnam Motorbike Tours: Hmong King Palace and Dong Van Old Town.

Not only is this building a historical monument but also an outstanding architectural landmark of the native ethnic minorities. It wouldn’t take an outsider long to appreciate how sophisticated the structure was.

The Old Town of Dong Van lies in a valley wrapped with rocks. The quarter was formed in the early 20th century and a refuge for only a few households of the Hmong, Tay, and Chinese before welcoming more ethnic groups. It was eye-opening to witness the lifestyles of the Kinh, Mong, Tay, and Hoa peoples.

Trust us; we guarantee a fantastic experience as you conquer the Ma Pi Leng pass. Ma Pi Leng Pass is among the four greatest passes in northern Vietnam due to its rocky terrain and breathtaking, untouched nature (along with Khau Pha, Pha Din, and O Quy Ho).

Ma Pi Leng Pass’ scenery stands out with its spectacular and unspoiled wild beauty. Thousands of mountains painted the horizon gray as we shifted our eyes to the north and northeast. The flawless scene left us totally awestruck.

Meo Vac Town fits snugly in a small valley with rocky mountains surrounding. Interestingly, most ethnic minorities have kept their culture intact with the outside world. Today could be one of the best motorbike rides in Vietnam.

The next visit on the 6th day is Ba Be Lake, belonging to Ba Be National Park and 150km riding from Bao Lac. We decided to go on a boat trip to easily look at the pristine sights around Tay's village.

Ba Be Lake is the biggest natural freshwater lake, spanning about 8km towards the north-south. This lake never dries up, which is a delight for riders like us: No matter which season you visit, you can always admire its peripheral charm.

Day 7: Ba Be Lake to Back To Hanoi Motorcycle Tours

Finally, we ended our 7-day motorbike tours Ha Giang with a shebang. Hanoi’s traffic is pretty crazy in rush hours (around 4-5 PM), which is why we had to head back early. Yet, we maintained a good mood because the trip to Ha Giang boosted our spirits and relaxed our minds. It also, undoubtedly, taught us a bunch about ethnic cultures located in one of the highest mountainous areas of Vietnam.

Our spirits were up, and our brains were unburdened by the time the motorcycle trip ended. Ha Giang’s unique cultures and scenery will definitely stay in our hearts for a lifetime.

We can’t wait to come back for more in our future Ha Giang motorbike tours! Will you come with us?

What riders have said about Ha Giang Motorbike Adventure on Tripadvisor!