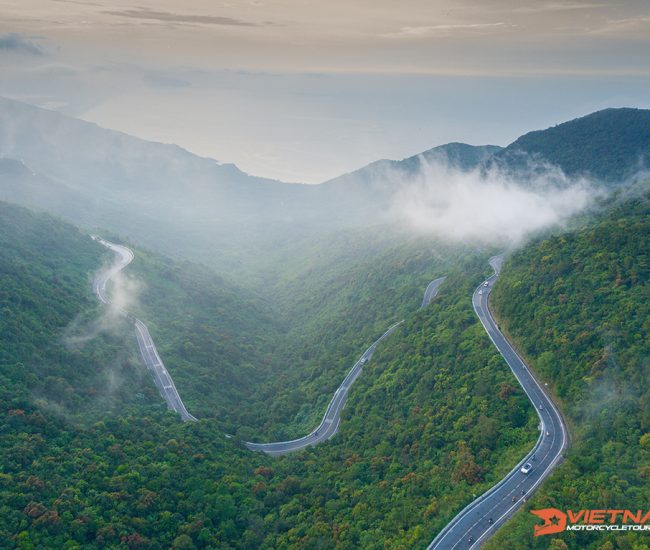 The Ho Chi Minh Trail is a famous and historically significant highway in Vietnam. It used to be the main road for transporting military equipment, food, and troops supporting the South Vietnamese Army during the Vietnam - America War. It is now an ordinary highway in Vietnam's territory that connects major cities like Hanoi and Saigon.

Motorbiking along this historical highway provides a great way for tourists to get off the beaten path, discover the stunning scenery of Vietnam's countryside, learn about Vietnam's history of war, its culture, and its proud tradition!

On this adventure, you can:

On the first morning of our adventure, we will convene at our VietnamBikers office to hear an informative instruction from the team leader before departing late at 9:30.

We speed along to avoid heavy traffic and head northwest along the beautiful Red River while passing through Son Tay district. The team then will go on through lovely villages before reaching our first destination in Phu Yen district (Son La province).

Phu Yen is a district located in the eastern Son La, nestled far off into picturesque mountains and jungles so lush as though they were from a picture postcard. Pristinely scenic is something to marvel at when traveling to this particular destination.

Check out Quang Huy commune if you want to take epic photos. The mountains there are breathtaking, and it's where you'll find some of Vietnam's best cloud pictures.

You can also explore the woods of General Vo Nguyen Giap, visit Gia Phu commune, or take a dip or go fishing in the mesmerizing Black River.

After breakfast, the team heads southwards to another beautiful place: Moc Chau. We will take in the scenery as we get there, and on the way, enjoy a great view on the Van Yen ferry, where we cross the Black River. Once in Moc Chau, we will stop at a farm town here for lunch.

Later in the day, we might have time to spend a few of our hours at most popular tourist sites, such as Dai Yem Falls, the local heart-shaped tea hill, Son Moc Huong Cave, or even Hua Tat Pass for some challenging motorbiking.

We then head towards Mai Chau district (Hoa Binh province). This area is lovely and not as famous as Moc Chau – yet it offers a whole host of wonderful scenic delights.

Mai Chau is home to some magnificent caves (Chieu and Mo Luong) that you cannot miss when you're in the area, while Pom Coong and Lac villages are filled with charming reminders of what life was like in Vietnam before the country adopted its more modern ways.

The team will spend the night at a stilt house, staying with Thai people who have made this place their home for several years now.

After breakfast in Mai Chau, we leave the quaint town and venture onto a paved trail near Song Ma. We will have lunch in Cam Thuy district before continuing along the well-known Ho Chi Minh highway towards our destination in Tan Ky.

Before reaching Tan Ky, the team can quickly visit Lat town. There you can see the 0 km-monument, a reminder of the official start point for the historic Ho Chi Minh Trail! You can also explore 600 square meters of exhibits containing wartime relics in the monument's exhibition house.

The team will continue to go another 30km from Lac village and visit Tan Hop commune, which is the home to many magnificent waterfalls. Here, we will have a chance to admire the beauty of a waterfall named Hong Son.

It is one of the most spectacular waterfalls in Nghe An, having a height of 120m, and has become so renowned for its resemblance to the shape of a woman's hair. After all the sightseeing, we will head to Tan Ky and stay for a night there.

Phong Nha – Ke Bang National Park is a world-famous destination for adventure travelers and certified divers. Located in Quang Binh province, Vietnam, this region is about 2,000 square kilometers big and one of Southeast Asia's most special natural landscapes.

It includes the famous Son Doong cave and more than 120 other caves. Son Doong is the world's largest cave with enormous stalagmite and stalactite and a large maze and cave river inside.

At 5 kilometers long and 200 meters high, and 150 meters wide, Son Doong is twice as big as Deer Cave in Malaysia. The park also has many other beautiful grottoes, exotic plants, and animals.

After spending the fourth day visiting the National park, the team will head to Dong Hoi city in Quang Binh. This historic city is nestled on Nhat Le River and was once used as a frontline by the Nguyen Lords during the war of the Trinh-Nguyen family before being obliterated by American soldiers in the war.

The city was consequently rebuilt, and today it's home to both foreign and domestic businesses and tourists who flock here for its natural beauty.

Today, there are many historical tourist spots that you can see. The first place of interest is the Tam Toa Catholic Church. The second place is Quan Gate, which was built during the Trinh-Nguyen period in Vietnam's history for the Trinh lord to serve as a defense against attackers from Nguyen.

Unfortunately, it has been damaged several times by natural forces and then once more by bullets, an unfortunate consequence of war for which we are all still suffering.

When you've been exploring all day, it's time to go for a swim at Nhat Le Beach. Located just along with the mouth of the same river, it is famous for its rough and rustic beauty.

Just one look at these shorelines and sparkling blue waters will have any visitor experiencing a rush of inspiration. It's not surprising that this place is considered one of the gorgeous beaches in the country.

After breakfast, the team will leave the city behind and head west into the old HCM trail to reach Khe Sanh. We will travel through a dense jungle that lasts nearly 200 Kms. This stretch of scenery has much to offer for those interested in wildlife spotting!

Khe Sanh is a small town in Quang Tri, known as the area where an infamous battle took place for around six months. It is considered one of the longest and bloodiest battles of the Vietnam War, which resulted in the US soldiers being repelled by the Vietnam military force.

The battlefield now stands as a museum – exhibiting relics from a pivotal time in history.

We start the day early in the morning by making our way to Quang Tri, where we will see Long Hung Church then proceed to Quang Tri Citadel. The Citadel was built during the Minh Mang king's era and used as a military base, and has been preserved as a national relic.

Afterward, we make our way along the coast and stop at Cua Viet and Cua Tung Beaches. We then set off on another leg of our journey towards Vinh Linh's impressive Vinh Moc Tunnels. One of the most famous Tunnels in Vietnam after Cu Chi tunnel in southern Vietnam.

Subterranean infrastructure to protect an entire village? Yes, it is Vietnamese's use as shelter during bombing raids held in the Vietnam - America war. The team will have a quick stop for lunch before setting off to the next destination.

To relish the delights of the locals, we will visit the shopping markets in Dong Ha after that. Once we arrive in Hue, you can make your way over to the Imperial City and Forbidden Purple City if we still have enough time. In the evening, we can take a walk along the Huong River.

Morning is a free time for everyone to explore other historical sites in this land, such as Emperor Minh Mang's mausoleum, Tu Duc's mausoleum, or Thien Mu Pagoda.

After having lunch, we head out to the Hai Van Pass that cuts through a range of mountains called Bach Ma. The pass used to be a dare for traffic because of its climb up and down the mountain range; however, now it is easier thanks to the tunnel's completion.

As dangerous as this scenic route is, however, nothing can compete with gazing upon the vibrant Lang Co sea from atop the rocky ledges of this pass.

In the middle of the schedule, we will stop for a brief visit to the Five Elements Mountains (Ngu Hanh Son) in Da Nang. According to Chinese philosophy, it is a popular tourist attraction that consists of five mountains named after five elements of wood, fire, earth, metal, and water.

This place is one of the top famous tourist sites of Da Nang, considered as a holy mountain with mysterious powers over the land and sea nearby. The team will then head on the road towards Hoi An town, where we'll spend the night at late-day.

Day 9: Sightseeing at Hoi An

We will spend the last day on our journey to discover the ancient beauty of an old town called Hoi An. It used to be a very important port in Southeast Asia for many centuries. The town is located on the banks of the Thu Bon River, about 50 km from Da Nang.

Today Hoi An is an appealing destination for travelers and tourists. As a UNESCO World Heritage Site, it has preserved its unique heritage. The town has hundreds of architectural sites, including temples, shrines, and tombs. The buildings are decorated with rich patterns and colors.

We will also make the 40-kilometer drive southwest to My Son Sanctuary. This place is a complex of temples, including temples from the Cham culture. The Cham civilization was a powerful culture that ruled much of Southeast Asia in the past.

The Cham people were Hindu and built temples in honor of their gods. The remains of these structures are majestic, even though they are in ruins. Some of these temples have been reconstructed and serve as reminders of the power and glory of an ancient civilization.

And this is also the final schedule of the 9-day trip discovering the historic Ho Chi Minh trail. The group will depart back to the center of Da Nang city to wrap up the journey after many days of driving together.

Our Hanoi - Hoi An motorbike tour in nine days will take you on a journey back in time to the Vietnam War over 50 years ago. It's an exciting way to experience the real country, not just the tourist highlights.

Vietnam has so much to offer, so make sure you discover it on your next trip. We hope to see you on tour so don't forget to contact us for booking!