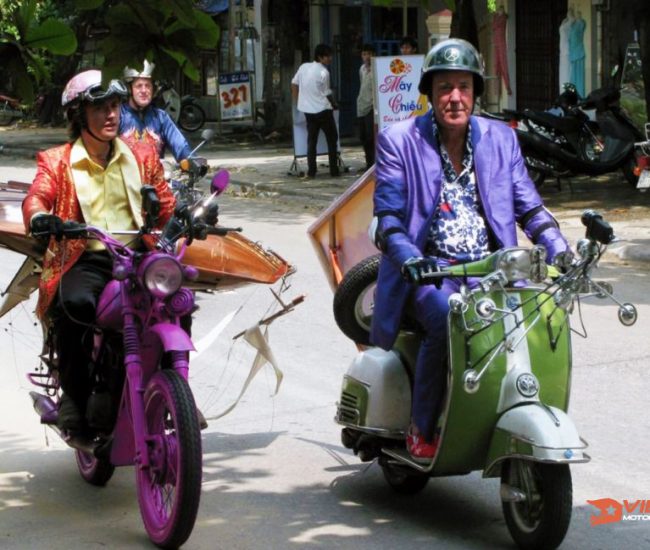 Officially airing in December 2008, Top Gear Vietnam Special is a special 75-minute episode of the BBC's automotive Top Gear show. In this special edition, the goal of driving throughout Vietnam was accomplished, which reshaped the concept of traveling in Vietnam.
Source: Andy Nova
Richard Hammond, Jeremy Clarkson and James May, the hosts of
the show, rode motorcycles 1000 miles throughout Vietnam in eight days. They started in Ho Chi Minh City (Saigon), headed north toward Ha Long city, and ended at a floating bar in Ha Long Bay.

The Top Gear Episode: Things Should Be Aware Of

How To Ride the Vietnam Top Gear Special Motorbike Tour

During the eight-day route, it seemed a bit boring if we only watched three guys on their rental motorbikes, riding throughout Vietnam, 1000 miles. Instead, the show tended to make the journey even more dramatic and enjoyable by letting the three riders carry three bags of rubbish that needed regular maintenance on their motorcycles.

To ensure riders' safety, a team of assistants followed them on their journey in the backdrop.

If you have no intention of having a support team when riding in Vietnam? No worry, you can take a look on a fully aimed tour/ rent a reliable, high-quality motorcycle for your journey.

The Chosen Motorcycles To Be Part Of The Journey

Jame Mays picked the classic Honda Club to go with him

Jeremy Clarkson chose an iconic 1967 Vespa as his partner

Top Gear has always centered on fast cars and expensive vehicles, so when our hosts Clarkson, May, and Hammond were given a briefcase cash for purchasing an automobile for traveling in Vietnam by motorbike, they were overjoyed to discover there were 1,000,000 in boxes.

They soon realized that the money was circulated in VND not Dollars or Pounds Sterling; they were left having to purchase a motorhome rather than something more exciting.

An Overview: Eight-day Route From Saigon To Ha Long Bay

An overview of the Vietnam Top Gear Tour and highlights

When Jeremy Clarkson, Richard Hammond, and James May went to Vietnam, the curse of Top Gear was upon them, and the trip did not go as well as it should have. Let’s see some highlights in their journey.

Let’s Dive Into The Journey

The first destination to head for was Dalat. Before jumping on the journey with a motorcycle, our host needed a helmet of their own. While Hammond got one without difficulties, Clarson and May had to get handmade helmets because of their head sizes.

Things may be quite tough with Clarson as he met with some problems with his Vespa and had no idea how to ride a motorbike. Fortunately, our hosts all arrived safely in the end despite some minor accidents on their way. While Clarkson and May both enjoyed local food, especially the snaked vodka, Hammond declined to try it.

The team started from Dalat towards the coastal city Nha Trang. When departing, Hammond was given a pink helmet in order to replace the one he previously shattered.

They met with heavy rains on their way to Nha Trang, and May ran out of gas, prompting the filmmakers to install a 73 Honda Chaly with a tiny cycle painted in Easy Rider stripes and stars as a backup vehicle.

The group decided to get some suits made in the central city of Hoi An, which is known for its custom tailoring, before continuing their journey along Ho Chi Minh Road.

They rode over Hai Van pass, a landmark connecting North Vietnam and South Vietnam. Interestingly, there are many different myths associated with this pass, including the story of a woman cutting off her husband’s head and throwing it into a stream below.

Stage five of the viral video began with the scene when the team was trying to get hold of the drivers’ licenses given from an instructor who only spoke Vietnamese. Unfortunately, they did not understand what he was asking them, and things were not going too well at all. Jeremy succeeded in getting one thing right, but it doesn't mean he passes!

Realizing that there's no point in continuing on their motorbikes, the three made up their mind to move their motorcycles on a train and continue the trip, but they ended up arriving in the wrong place.

In the last stage, Clarkson, Hammond, and May must find a isolated bar in Ha Long Bay. After creating amphibious vehicles, they stared from the following day and made their way to the set destination, hoping they would not sink! Eventually, Hammond & Clarkson succeeded and made it to the bar in one piece. May, in contrast, had to swim to the bar after his boat got sinking.

The experience of adventures and entertainment is incredibly subjective. There are plenty of things that some might consider "adventurous," but other people would find horrifying to watch.

During the tough road trip filled with mishaps, fender-benders, blown budgets & sinking boats, the trio created a strong sense of entertainment for the audience.

If you're planning your own grand cross-country road trip, arrive in style and rent some motorbikes! Thank you for reading this blog on Top Gear Vietnam Special!

What riders have said about Top Gear Vietnam Special Motorbike Adventures on Tripadvisor!