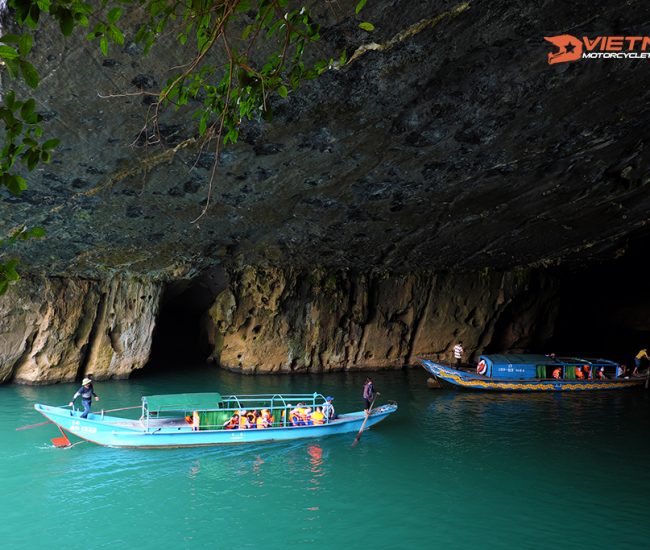 The Ho Chi Minh Trail Motorbike tours have long been the stuff of legends. These adventurous mountain roads in Vietnam provide backpackers with an alternative to the well-traveled coastal route. They weave between still-island settlements as they make their way through the mountains before crashing into the valleys through endless rice paddy fields. It is every rider's dream, including mine.
While most tourists to Vietnam take the well-traveled route, my friend and I chose to be on the back of a motorcycle, headed south on a 12-day journey that took us past the picturesque Vietnamese countryside, insanely coastal roads, and several historical sites.

Our 12-day Ho Chi Minh Road motorbike tours are filled with thrills and spills from the north to the center. Along the trip, we winded through different provinces, villages, beachside areas, and jungles. Let's take a closer look at the itinerary.

On the first day of the tour, we were introduced to the brief itinerary of the motorbike trip. After rush hour, at around 9:00 a.m, we began riding to the first destination - Thac Ba Lake.

It is one of Vietnam's biggest man-made lakes and was constructed in 1970 as part of the Chay River hydropower plant project. There are 13 ethnic minorities living in the area around the lake, including the Tay, Mong, Nung, Phu La, Cao Lan, and Dao.

We kayaked here, explored several caverns, and enjoyed a tranquil night in a local homestay in the Vu Linh community of the nearby Dao ethnic group.

The homestay is simple but clean and ideal for a thorough understanding of the local customs and a chance to sample some delicious home-cooked food.

After breakfast, we walked around Ba waterfall and traveled to Sapa. Along the way, I could see rural Vietnam's broad, verdant countryside stretched out before me through several patches of mountain fog.

Our modest convoy traveled through dozens of remote towns filled with happy, waving children, knee-deep rivers to cross, and thin mountain routes to climb and descend. We arrived at a hotel in Sapa at the end of the day and had a comfortable night there.

We spent our third day merely in Sapa exploring. We took a morning stroll through Sapa town and the local people's market, where hordes of sellers dressed in traditional attire from the Dao, Han, Xa Fang, Tay, and Thai tribes congregate.

Then we take a quick journey to Silver Waterfall and have lunch there. We spent the remaining day seeing the tribes of minority communities such as the Cat Cat and Ta Phin. These villages are still relatively unaffected, allowing me to look closely at the various Vietnamese tribes and their varied lifestyles and cultures.

When we returned to the homestay, the hosts had prepared food, and we had one of the most heartwarming group dinners with special hot pots of Sapa.

Goodbye, Sapa; our motorcycle journey continued to Than Uyen. I was completely immersed in this path because I had conquered O Quy Ho pass, the most difficult and tortuous pass in the Northwest mountains, with perilous bends.

When I stopped at the pass stop, I saw the boundless vastness of the Northwest sky. At 4:00 p.m, we arrived at Than Uyen and had dinner at the hotel.

We had a once-in-a-lifetime chance to try a Bong fish dish, with thin sliced raw fish dipped into lemon juice and served with herbs. What a lip-smacking meal!

On day 5, we departed Than Uyen in the morning and headed to Mu Cang Chai. This area seems like a gem since it is tucked away in one of the Red River's deep valleys, where mountain towns and terraced crops coexist.

After lunch, we crossed Lung Lo pass, a rocky and perilous mountain pass road with a long and magnificent history.

God blessed us when we encountered a traditional festival on the go, where people played “danh du” (local language). This is akin to playing on a swing but  you stand up instead, and the swing is super high. The colorful traditional costumes flew in the wind with crackling laughter, drawing a vivid and joyful picture in front of our eyes. Today could be one of the most amazing motorcycle rides in Vietnam.

The 6th day conquering the Ho Chi Minh Trail by motorbike brought us to Mai Chau. To have lunch, we first traveled to Moc Chau. We were surrounded by extensive green tea plantations that stretched as far as the eye could see and covered numerous rolling green hills where we were.

The region is also home to stunning traditional Vietnamese hill tribe communities and is particularly well-known for its abundance of exquisite flowers.

Arrived in Mai Chau around 5:00 p.m; we stayed with the white Thai at the stilt house, had a delicious dinner, and sang karaoke till 10:00 p.m.

By the following day, we'd left Mai Chau and headed to Tan Ky. That was a great morning when we strolled through the bamboo groves that line the Ma River. After eating lunch at a neighborhood eatery in Cam Thuy, we continued to Tan Ky, where the renowned Ho Chi Minh Trail's KM 0 began.

During the war, Milestone 0 km was the beginning of the legendary Ho Chi Minh trail. This was a meeting place for food supplies and weaponry for the Vietnam War soldiers fighting in the South. We spent the night in a modest motel in Tan Ky.

After breakfast, we took our motorcycles down the historical trail to South Vietnam. The trail is almost completely repaired but still provides stunning views of the river, the mountain, and locals going about their daily lives.

Then we went to Phong Nha - Ke Bang, the largest and most magnificent cave in Vietnam, and Indochina - a UNESCO World Natural Heritage.

Here, we were trekking through the jungle, passing through an ethnic minority village, camping, and eating a warm dinner. Our tent was on the sandy shores of a beautiful natural pool, where we could swim and rest.

In the morning, we were excited to be boating and see the World Heritage site of Phong Nha, where local inhabitants and troops hid from constant bombing throughout the war.

A small wooden boat ferried us over the tranquil Son River, where we were surrounded by spectacular karst mountains and rich green flora.

Then, we took a detour to Dong Hoi, a seaside city that endured heavy US military bombardment during the conflict, and overnight in a hotel.

After departing Quang Binh, we headed to Khe Sanh. Along the way, we spotted Agent Orange-sprayed foothills and plenty of signs of bombing on the slope. Following that, we visited the Vinh Moc tunnel, the Truong Son Cemetery, the iconic Hien Luong Bridge, and Khe Sanh ( a former US Marine base).

After a long day of riding, we had a family dinner in the homestay. We sat at the same table, talked about stories, shared laughter and food, drank the local rice wine, and then had a fun-filled night of karaoke.

The following day at dawn, we started our journey to Hue. We drove south across the Da Krong Bridge into the famed A Shau Valley, a hotbed of wartime activities. Then, we passed through Hamburger Hill and many barren mountains.

After descending the treacherous Me Oi Pass via a lush backcountry, we arrived at Hue, a stunning city along the Huong River's banks. We got a nice night's rest at the hotel here.

We started the final day of our journey with breakfast of Bun Bo Hue - beef noodles. Afterward, we rode around the Huong River and visited Thien Mu Pagoda and Hue Citadel.

Next, we got on National Highway 1 and drove up Hai Van Pass or Cloudy Pass. One of Vietnam's most beautiful coastal routes, the pass runs between Hue and Da Nang. We stopped for a rest at Elephant Stream and Lang Co Beach along the route, and the scenery is breathtaking.

The 12-day Ho Chi Minh Trail motorbike tour came to an end at lunchtime as we said our goodbyes, and we returned to Hanoi by air.

The Ho Chi Minh Trail motorbike tours left me with many memories and worthwhile experiences. At the end of the expedition, I felt accomplished because I had overcome the most beautiful off-the-beaten path of Vietnam and discovered this S-shaped country. I will come back for other Vietnam motorbike tours for sure!

If you also enjoy the path on the trail, pick things up and let your adventure begin!

What riders have said about Ho Chi Minh Trail By Motorbike On Tripadvisor!